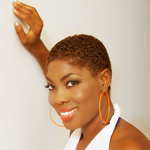 Biografie:
With a voice that can only be described as a cross between Anita Baker and Sade, Singer/Songwriter Keishera James exudes originality. With her raspy alto pipes, Keishera infuses her Jamaican heritage and R&B/Neo-soul melodies, resulting in an unmistakably sultry sound. Her musical background stems from her cultural diversity from traveling and living in Paris and London where she discovered her true passion to singing and songwriting. In late 2011 Keishera decided to move to Berlin, Germany to pursue music full time and venture into new territory which proved to be successful.